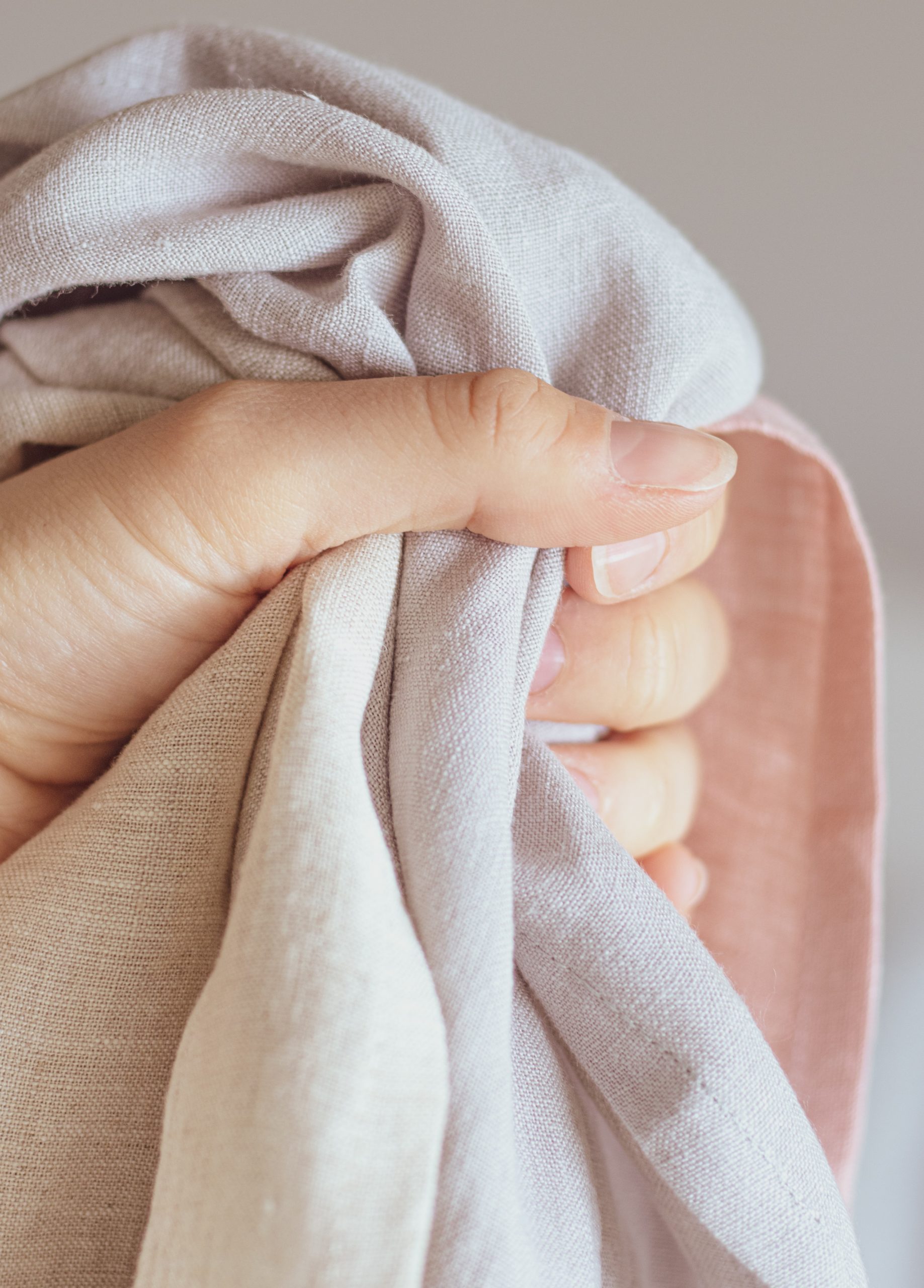 I love the feel of freshly aired French linen in my home. Whether it’s for drapery, curtains, cushions, sheets, or simply a couple of linen shopping bags in my kitchen – linen just adds something special.

Recently, my life’s dream came true when I won a trip to French Normandy. For those who don’t know, this is the traditional “cradle” of French linen, where the linen fields have been harvested for centuries. Finally, I got to see just what goes into making French linen, how it is processed, spun, and finally woven into the stunning array of bolts of linen fabric.

The History of French Linen

French linen is not the oldest form of linen, and the ancient Egyptians used linen bandages to wrap and bind their mummies. Archeologists still discover these bandages intact and in surprising condition, despite being thousands of years old.

French linen became popular when French King Charlemagne made it law that all French families should be involved in planting flax and linen production. Making linen became a family culture in France as a result, and today, many linen producers are several generations old family-run businesses.

If a strong and durable fabric is required, linen is still the option of choice. From tarpaulins to ropes, canvassing, and clothing, linen remains popular today.

The 5 Steps in Making French Linen

The process of making linen is still the same as it was thousands of years ago. While there may be new machines that speed up the process, much of the method has remained unchanged. Making linen is not a simple or quick process, which is why the final product can be quite costly.

The flax seeds that produce the linen crops are located next to the English Channel, where the seeds are sown from mid-March to mid-April. Every six to seven years, the fields are rested via crop rotation. It takes about 100 days before the flax plants are ready for harvest.

Experienced farmers know to wait until the plants have grown to at least 3.28 feet (or a meter) in height as longer stems mean better and longer fibers. The longer the fiber, the better the quality of linen that can be woven from it.

Harvesting is a time-consuming process when done by hand, as bundles of the flax plants need to be cut near the ground, then laid out to dry. With a special machine, the harvesting process is easier, but many farmers still follow the traditional process, not wanting to risk damaging the flax stems and breaking the long linen fibers.

Step Three: Drying in the Fields

The traditional drying process takes a staggering five weeks. The flax plants are left to dry on the field under the warm sun. Once the stalks are thoroughly dried, the flax plants are gathered and taken to the processing mill.

With newer technologies that make moving the harvested flax plants easier, it has become possible to wash the plants (retting), dry them, and then split the fibers inside. Previously, the washing was the result of dew covering the fields during the early morning. The resulting washed and dried fiber harvest is of a better quality with longer fibers, which are ideal for spinning.

The next step is to break the outer part of the stems so the inner linen fibers are exposed. This is accomplished by large machines with metal rollers that crush the stems without breaking the fibers.

The rougher parts of the plant are used for making paper—like the U.S. dollars, which requires a strong paper with resilient natural fibers. Finer parts of the fibers are used to spin into yarn that is woven into the classic linen material.

To separate the finer fibers from the rougher plant parts, the flax plants are combed with a hackling machine. The result is separate bundles of natural linen fibers, roughage, and flax seeds. Nothing is wasted.

French linen is not the only linen available on the market. There are some other linen fabrics from countries like Egypt and Turkey that are also fine quality linen. However, only French linen has its unique set of properties. These characteristics of French linen are what make it the gold standard in the linen world.

Since French linen is still grown in exactly the same way as it has been for hundreds of years, with no pesticides or growth-boosting fertilizers added, it is considered hypoallergenic. The fields are simply rested every six to seven years, so the linen is 100% organic. This is important as French linen is marketed as being truly hypoallergenic, which means you should not be exposed to toxins or harmful molecules that have become part of the linen fibers from the way the plants were grown.

Linen produced in other countries can’t all claim to be 100% organic. Pollution, soil additives, agricultural practices, and chemicals used during the manufacturing process can lead to linen that may cause allergies and fabric that isn’t skin-friendly at all.

Since French linen is made from long stems that have longer fibers (over three feet in length), the yarn that is spun creates a better quality linen. French linen is renowned for becoming some of the smoothest linen fabrics in the world exactly because of the long fibers.

The unique long fibers of French linen ensure quality and longevity way beyond any other linen type.

Is French Linen for You?

You may wonder whether French linen is worth the cost. I had never owned any French linen before my trip to Normandy. However, each of the bed and breakfasts and boutique hotels we stayed at during my visit had the best quality French linen sheets and duvets on their beds. I slept like royalty.

The soft, cool sensation of the French linen on my skin is something that I fell in love with, and I returned home with several sets purchased from local sellers in my luggage. I even gave up a few pairs of jeans so I could fit in another set of French linen curtains (and still be just under my weight limit for my flight).

I know these sheets will last. In fact, my kids will one day probably inherit them, as long as I take good care of them (the sheets, not the kids).

I adore my French linen, and I know that once you’ve gotten your first (and there will be more) set of French linen sheets or drapes or curtains or cushions, you will love them too. Having seen firsthand how flax plants are turned into long-stemmed fibers that are spun into yarn that’s woven into the amazing fabric known as linen, I have a new respect for the age-old tradition of weaving French linen.

At KOVI Fabrics is the premier destination for designer grade upholstery fabrics. Our selection features over 25,000 fabric choices and hundreds of genuine leather options always offered at designer direct pricing.